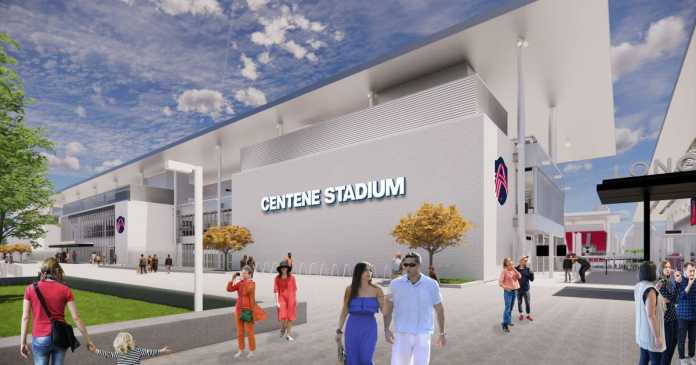 St. Louis City SC and Clayton-based health care titan Centene Corp. inked a 15-year deal for naming rights for the stadium at Market and 20th streets where the team will play beginning in 2023. Centene will have its name emblazoned on the outside of the 22,500-seat facility, the scoreboard and other signage.

“This is such an exciting partnership,” said team CEO Carolyn Kindle Betz. “We have some great things planned for the region.”

The deal for the naming rights is a big milestone for the nascent club, likely the biggest financial announcement after the stadium itself, and could bring in $3 million to $5 million a year in revenue. It also marks a turning point in how one of the largest companies in the region regards the city.

Kindle Betz — whose family, the Taylors of Enterprise Rent-A-Car, owns the team, along with World Wide Technology CEO Jim Kavanaugh — said the two organizations also will partner on health and wellness initiatives in the region, details of which are still being worked out.

The deal renews Centene’s interest in the city. The company in 2008 pulled out of plans to build a campus at Ballpark Village. Instead, it built the first phase of its $770 million expansion in Clayton.

And in 2020, the company announced plans to build a $1 billion eastern headquarters in Charlotte, North Carolina, saying it would hire as many as 6,000 people there over the next decade. Comments from outgoing CEO Michael…

Keeping Up with the EEOC: Artificial Intelligence Guidance and Enforcement Action