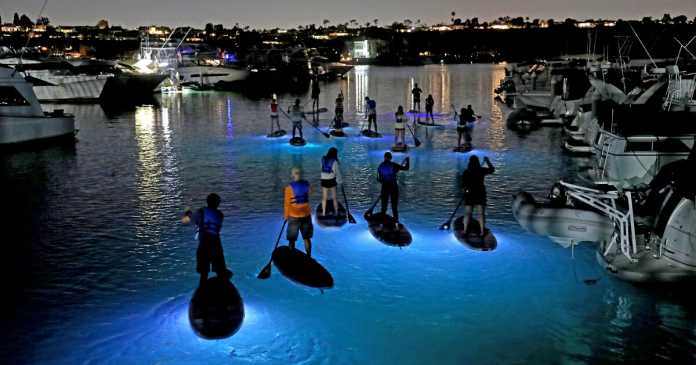 The last time I went stand-up paddleboarding, I glanced above when I heard a squawk, lost my balance and stepped right off the back of the board into the river. My son thought it was hilarious.

So when I signed up for a nighttime “SUP Glow” tour with Pirate Coast Paddle Co. in Newport Beach, I promised myself I’d do my darnedest to stay upright. Which meant getting in a couple of practice outings first.

“Good plan,” Pirate Coast owner Mark Oehlman said when I showed up for my tour. “We strongly advise people to have some experience so that they can enjoy themselves. Our nighttime paddles aren’t for novices.”

But if you are a somewhat confident SUPer, these evening trips can be a sublime adventure, especially because the bottoms of the boards are outfitted with waterproof LED lights that illuminate the surrounding water. And because it’s often a quiet hour with little conversation, your senses are heightened as you listen to the gentle slosh of water and watch small fish darting through the lights. Pay close attention and you might even see stingrays in the shallows beneath your board.

“It can be sort of a spiritual experience out there,” mused Oehlman, 40, a former professional soccer player and firefighter who grew up in Irvine. He started the business in 2010 and began offering the glow tours six years ago. “I honestly don’t know of anywhere else you can do this on the West Coast, in part because working with underwater lights and saltwater is difficult. But we’re making it go and our tours always fill up.”

Oehlman learned about stand-up paddleboarding while visiting Hawaii. “I thought people standing on what appeared to be surfboards and paddling looked pretty odd,” he said. “So I asked what that activity was all about.” He tried it, liked it and then bought several boards when he returned to Southern California. In L.A., SUP has become a popular watersport over the last decade — the low-impact activity can help people improve their balance and strengthen their core. And the boards, which are 10½ feet long, are stable enough to carry a companion — a child or calm dog, perhaps. (However, for this tour, participants must be older than 15 and human.)

Our evening began shortly before sunset when we were handed our (mandatory) lifejackets and were outfitted with long paddles that were slightly taller than our arms stretched above our heads. My group — composed of families, couples and friends — gathered on the beach for a safety talk by head guide Andrew Oldham, a 19-year-old college sophomore from Fullerton who grew up surfing around Newport Beach.

“I’d paddled SUPs some before I got this job, but now I’ve probably led 50 tours,” said Oldham, who swam breast stroke and freestyle on his high school swim team.

A few paddling tips I learned: Once on the board, stand with your feet parallel and hip-width distance for the most stability. Keep your knees slightly bent, your back straight and look toward the horizon. Shift your weight by moving your hips.

We then chose our boards and pushed off into the warm water of Newport’s Back Bay.

When I gazed around, looking at the big yachts or up to the bluff on the north side of the channel, I also focused on my balance, not wanting to repeat my walk off the back of the board again.

On our outing, we slowly stroked our way from the Newport Dunes Back Bay to the Pacific Highway Bridge. After the sun disappeared, we looked like a school of glowing, torpedo-shaped creatures heading out to sea.

Oehlmam said paddlers will occasionally see bioluminescence, sometimes referred to as sea sparkle, an unusual phenomenon that can be caused by single-celled organisms called dinoflagelates that produce brilliant flickers of light, particularly in breaking surf, the wake of a boat or even an SUP or surfer. “I’d experienced bioluminesence when I played professional soccer in Puerto Rico and swam in the ocean,” he said. “Sometimes the water would light up with every stroke.”

Eventually, as I headed west, I relaxed into a gentle rhythm and my thoughts drifted in different directions. I thought about the fish that light up in the depths of the ocean and the athletes who paddle hundreds of miles on open water.

As we made our way back, the wind that had been slowing us down suddenly gave us a boost.

We headed back on the south side of Spider Island before returning to the main channel. By then, several of the group were kneeling on the soft rubber tops of the boards or even sitting down as they stroked forward. “Whatever is most comfortable works,” Oldham said.

Toward the end of the trip, we paddled past large powerboats in the marina, some perhaps 50 feet long, where we exchanged greetings with a few owners who were sipping drinks and chatting. Then we dipped under a bridge into a lagoon that’s part of the Newport Dunes complex for a final lap.

As the tour ended, I gently drove my board onto the beach and hopped off, stumbling ever so slightly before regaining and my balance. So no falls on either water or land.

Oehlman congratulated me after I turned in my gear.

“But everyone gets wet in this sport,” he said with a chuckle. “No one would have though less of you. After all, it is a watersport.”

The questions to ask yourself to determine if it's time for...

Crime goes up on L.A. trains and buses as COVID eases