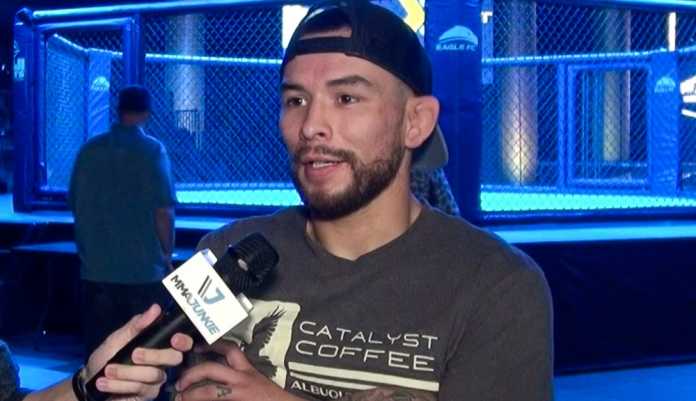 Former UFC flyweight title challenger Ray Borg has experienced his fair share of highs and lows throughout his career, but the 28-year-old believes he has hit a new stride.

Following his unceremonious exit from the UFC in 2020 after missing two straight fights, Borg contemplated retiring from the sport, but ultimately decided to continue fighting after realizing that he was built to compete.

At Eagle FC 44, Borg (14-5) hopes to make it two straight wins following his unanimous decision victory over Jesse Arnett at UAE Warriors 20, as he returns from a seven-month hiatus to face fellow UFC veteran Cody Gibson.

“At this point in my career, I’m not going to fight anyone who’s a bum,” Borg told MMA Junkie. ” He’s a good fighter, he’s coming off a good win, but there really are some levels to this game.”

Having shared the cage with Demetrious Johnson when he was in his prime at UFC 216, Borg believes his experiences in tough situations such as that one, coupled with his renewed focus on the fight game, will give him the edge over Gibson (18-7).

“Ray Borg, right now mentally, is in a very dangerous spot for any of my opponents,” Borg explained. “I’m focused, I’m driven. I haven’t been this focused since I’ve been a young kid. When I first got in the UFC and I was a young, hungry lion, now I’m that seasoned, polished lion. I’m in a great, great spot right now.

As Eagle FC prepares for its first event on American soil, Borg says the promotion has done a fantastic job treating its fighters well, living up to the expectations when he heard former UFC champion Khabib Nurmagomedov was involved.

When will we see Alexander Volkanovski-Max Holloway 3, Aljamain Sterling-Petr Yan...