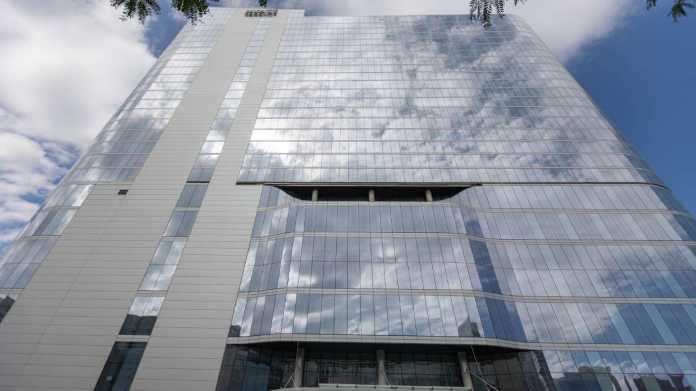 The New Hyatt Regency is pictured in its last stages of construction in downtown Salt Lake City on Aug. 5. It opens in October. (Ben B. Braun, Deseret News)

SALT LAKE CITY — The new 700-room Hyatt Regency in downtown Salt Lake City is all but ready for its grand opening in October, which will officially mark the end of a building nearly two decades in the making.

Planning for the building, which is attached to the Salt Palace Convention Center, began all the way back in 2005. The idea went through all sorts of adjustments over the years, leading up to construction of the $377 million project that began in early 2020. Hyatt is currently going through the process of hiring staff members, and reservations are open for hotel stays Oct. 17 and later.

“This is a very, very exciting time in Salt Lake’s history and I think I can speak for everyone that we didn’t know this day would come,” Kaitlin Eskelson, president and CEO of Visit Salt Lake, a private, nonprofit organization that promotes Salt Lake County tourism, said during an online preview event Thursday.

The main point of Thursday’s event was to showcase what the hotel — the first Hyatt Regency in Utah — will offer guests, while teams put the finishing touches on the building. Eskelson believes the hotel will help draw “more, bigger and higher quality” conventions to Salt Lake City; the county is already on track for its “biggest booking year ever” with 830,000 room nights tied to Visit Salt Lake promotions.

“I have to say the Hyatt has played a huge role in attracting these groups,” she said, later adding that the new hotel played a vital role in the city winning the massive biannual Outdoor Retailer convention back from Denver. “This hotel is nothing short of a game changer. It has transitioned our conversations (and) it has opened up the…

Rents are going up, forcing Chicagoans to make lifestyle changes, or...

Manchester school superintendent a finalist for job in Nevada – The...