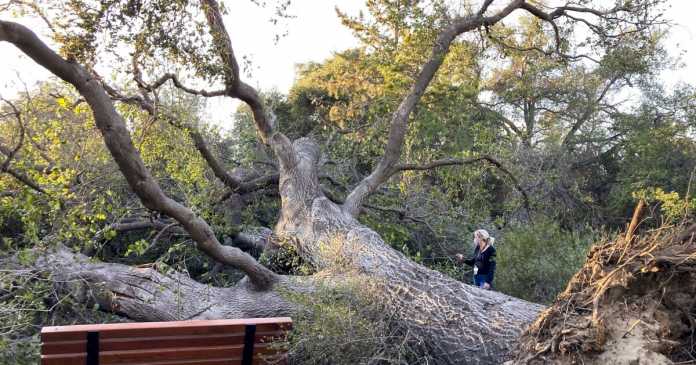 When the Santa Ana winds stormed through Southern California on Jan. 21, they toppled trees and knocked out power in much of Claremont, but Lucinda McDade, executive director of California Botanic Garden, was mostly worried about frozen seeds — embryos for the thousands of rare plants in the seed bank of the state’s largest botanic garden dedicated to native plants.

She heard the winds shrieking that night and worried that the power outage would start thawing the seeds, so she was up around dawn trying to get backup power restored at the garden. She knew the main gate would be useless because it’s power-operated.

What she didn’t expect is that 70-plus trees and a blizzard of fallen branches, leaves and debris would make the rest of the garden impassable.

“The bizarre thing is that Claremont is usually pretty protected from the winds. People will call and say ‘It’s blowing 60 mph in Fontana!’ but when I look out my window, my oak tree is waving like the royals do, slow and gentle,” McDade said.

But around 9 p.m. on Jan. 21 she could hear the wind tossing things around on her patio, and it nearly yanked her door off its hinges when she went outside to investigate. The power went out and she made a plan to go to the garden early the next morning — a Saturday — to make sure the backup generator was working.

It wasn’t, but restoring power to the freezer was a relatively quick and easy fix, she said. Cleaning up the huge fallen trees, mountains of palm fronds and ankle-deep piles of debris has been another matter.

The garden has been closed since the wind storm, and McDade said it must remain closed until the trees blocking trails or threatening to fall have been removed.

Happily, two of the garden’s most famous trees withstood the winds — the Majestic Oak, the oldest oak on the grounds, and the tall Boojum tree in the back reaches of the garden.

But many other trees were either entirely uprooted, or partially blown over badly enough to sever their main roots and require their removal, she said, adding that one of the saddest losses was that of a rare island live oak, which usually grows only in the Channel Islands and parts of Santa Barbara County.

The garden has a catalog of every tree in its 86 acres, but it can’t freeze the acorn seeds that allow them to be replanted, McDade said. “They turn to mush when they come out of the freezer,” she said, so the garden’s horticulturists will have to visit native stands of the damaged oaks to gather more acorns for replanting.

Garden staff who normally work desk jobs were out with rakes and shovels last week, clearing the walkways, she said. “It looked like it snowed 6 inches of leaves, branches and sticks on all the trails.”

And then there was the small mountain of palm fronds that had to be removed from the entrance to the administrative office. the wind knocked out the entire skirt of brown fronds on a California native fan palm next to the building, breaking out a third-floor window, destroying a canopy and blocking the main door.

“It took at least four truck loads to haul them all away,” said Amanda Behnke, California Botanic Garden’s director of advancement.

McDade said she hopes to reopen at least the front 35 acres of the gardens in the next few weeks, after the trees are removed, “but right now it looks like a war zone, with heavy equipment running around and trees all over the ground.”

Volunteers will likely be needed next winter when the garden starts replanting, but the damaged trees and plants must be cataloged and removed first. The garden doesn’t do planting in the spring or summer because the heat can damage tender seedlings, so replanting likely won’t start before late fall or the winter, McDade explained.

In the meantime, the big priority is getting the garden safe enough for visitors. Garden staff could only do so much to help with the cleanup, Behnke said. “We have to hire specialized arborists to safely remove these trees — we can’t just have volunteers running around with chain saws — and unfortunately insurance doesn’t cover removing trees that have fallen down.”

People who want to help should consider making a financial donation to the garden, McDade said, and then plan on visiting frequently once it reopens, to help replenish its coffers.

Another way to help? Become a member. Annual memberships start at $50 for individuals and $85 for families and offer unlimited admission to California Botanic Garden plus reciprocal admission to 300 other botanic gardens in North America, including 35 in California.

This is a time when native plants start blooming, so McDade is eager to open the gates. “I know the garden is part of the psychic wellness plan for so many people who come to walk it every day,” she said. “I got so many messages during the pandemic [when the garden was closed] from people saying, ‘I’ll never take the garden for granted again.’

“But the garden is still beautiful. There are large areas that look like nothing happened … The interaction of the wind with the trees is a fickle thing. It’s sad, but we’ll be back.”